Still in development, THE INSATIABLE MOON is a new musical based on the controversial novel by Michael Riddell.
Available online here:

The musical has been the recipient of a development workshop through the University of Melbourne and Victorian College of the Arts in 2017, has been part of the New Musicals Australia process, and has had feedback through Homegrown Aus ‘Grassroots Initiative’ in 2018.
For more about Homegrown and Australian musicals:

Review by Simon Parris from the 2016 Midsumma Festival Season:

‘Talented songwriter Jamie Burgess has managed the impressive feat of penning the book, music and lyrics for this new, full-length musical. Burgess also took on musical director duties, and laid down the recorded instrumental backing tracks for the performances.

The songs are quite enjoyable, and the comedic focus is balanced with the inclusion of a couple of gentler ballads. The book and lyrics are heavy on pop culture references, innuendo and smutty wordplay, scoring plenty of laughs from the opening night audience. The fairly basic sound design (by Evan Drill) interfered with delivery of some lyrics; this issue may well be smoothed out as the season continues.

Burgess’ book is not as strong as his songs, and perhaps needed the input of a second pair of eyes or dramaturge. The second act deviates from the central storyline before eventually returning to our hero, Butch. The structure of the book, however, is not really all that important for the outlandish, frothy fun that is the aim of the show.

The story takes place in a world where everyone is gay. Butch Masters is the odd boy out, growing up heterosexual. Villainous Bea St. Lea strives to kill Butch so that her invention will remain the only way for women to become pregnant.

One odd aspect to the storytelling is that for an ostensibly gay-themed show, a very large proportion of the show is spent on heterosexual male-female relations. Also, the fear and disdain the characters have for heterosexuality seems out of line with the current gradual diminishing of homophobia in the real world. Overall, this context seemed more fully explored in 2002 off-Broadway musical Zanna, Don’t!.

Director Dirk Hoult keeps energy sky high, which is great for selling the over the top characters. Comedy tends to work better, however, when played straight. The variety of accents is also an odd choice.

Choreography by Jason Teasdale is well served by the high-energy vibe. Teasdale has drilled the ensemble cast well, and makes good use of the tight stage space.

Jason Bovaird’s colourful lighting design is a solid feature of the production, making abundant use of moving lights in line with the nightclub feel. The lighting is so effective, in fact, that set designer Daniel P Moulds really should not have bothered with the very basic folding panels that are moved into place to make a small contribution to the various settings. Colin McLean’s costumes are a riot of camp colour; nary a square inch of fabric goes without dazzling sequins.

Antony Steadman channels the great Divine in an amusing characterisation as dastardly Bea St. Lea. One of the most experienced actors in the cast, Adrian Li Donni demonstrates his accomplished performance skills in the key featured role of Randy. Justin Clausen impresses with his character Trunch’s big number, “Cold Hard Love.”

This is a show to enjoy with some friends after a drink or two to get into the festive Midsumma spirit.’ 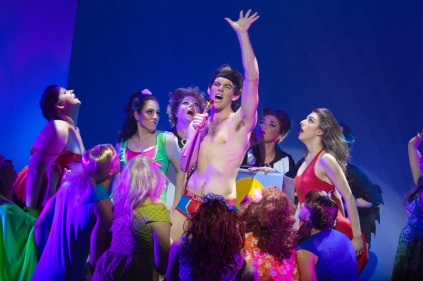 In development, JUST DESSERTS was the recipient of funding through the Victorian College of the Arts inaugural New Music Theatre Initiative in 2012.

Review by Melody Nixon from the 2009 BATS Theatre Season:

Becoming the Courtesan is a feisty piece from drama school duo Jamie Burgess and Karen Anslow. The singing pair have poured immense amounts of time and effort into this comedic tragedy, which began as a NASDA (Christchurch’s National Academy of Singing and Dramatic Arts) music assignment ten years ago. Anslow’s self-constructed role is daring, Burgess’ convincingly maudlin, and the play is held together with a good dose of wit as well as some gorgeous singing and all round talent.

When Lorenzo (Jamie Burgess) opens centre stage adorned with gothic dress and cape, visually I am reminded of a scene from the Phantom of the Opera – though Burgess’ initial singing voice may lack the requisite punch. Then enters Anslow, and the gilded frame she peers through begins an ongoing theme of renaissance-style decadence and seduction. If there were any doubt among viewers, even after the title, as Madame Cochineal Anslow makes her position immediately clear: a woman “as well kept as she is” is a valuable find.

As it turns out, this well-kept woman is what Lorenzo is really here for; yet she, with her wit and strength, must in turn prevent him from dominating. As Lorenzo reveals his ‘real,’ dark self La Cochineal’s two sides are likewise slowly exposed; though in too explicit a manner near the end to really let us draw our own conclusions. The irreverent Courtesan’s ambition looks set to become her downfall as the final scene of the play escalates into Grecian melodrama. Though fitting with the historical genre the play seems intent on capturing, the overzealous moves of the two actors at the play’s end detract from any subtlety or nuance that would have perhaps left viewers with a more lasting impression. Similarly there were occasional gaps of reason in the plot, for example with regard to Lorenzo’s motives for the final deed of vengeance against his father.
However both actors appear to have carved out in this work the room to express themselves as freely as they wish. A sense of the actors’ own personalities comes across more than once, in for example the chicanery of “The Thief of Love,” or the almost private series of kitchen jokes alluding to sex.
Stage manager Corinne Simpson and visual effects guru Ian Harman manage some beautiful visual play, building on the themes of magic and trickery that characterise La Cochineal’s den. The effect is particularly striking when (who I assume to be) Harman emerges from beneath Lorenzo’s cape during the retelling of a moment of great lust. The naked actor whispers into the nobleman’s ear and then slinks away, and the audience is hushed by the beauty and simplicity of the moment.

All in all BATS Theatre’s opening work for 2009 is a well honed and well crafted piece that is a pleasure to watch. Although this reviewer found it had too much of a tendency toward melodrama, the creators’ genuine passion for their work was rich and rewarding.

Review by Ewan Coleman for The Dominion Post – from the 2004 New Zealand Tour:

‘Though music can be a powerful purveyor of emotion, musicals these days tend to deal with their subject matter in a rather saccharine way, so it’s with some scepticism that one approaches a musical about what has become an icon of kiwi culture – Jake The Muss and his missus…

But Alan Duff’s heart-wrenching story of life in the poverty-stricken ghettos of urban New Zealand and the search for cultural identity through the haze of drunken violence has, with reasonable success, been brought to life through karanga, haka, rap, and songs with poignant lyrics by Jamie Burgess, in this musical version of Once Were Warriors.

Though the violence is more suggestive rather than real and the expletives have been deleted, the underlying passion and tension that besets the Heke family is still there.

That Jake (Willy Craig Fransen) and Beth (Tina Cross) do not initially convey a sense of violence is more to do with the way the production is structured than with their performances. Each comes into their own in the final moments, especially Cross, who at the end, cloaked and waving a mere, shows that she is every bit a warrior princess bred to embrace her cultural heritage. And the show as a whole works much better in the second half. It is tighter and more succinct in its storytelling, and somehow captures the essence of Duff’s book more than the opening.

But it is through the children that the show really works, especially the oldest daughter Grace, who in many ways is more central to the story than Jake or Beth. The lyrics of her songs and the performance of Maria Rose MacDonald as Grace creates moments that are not only gut-wrenching, but also give hope, as it is through her that unification and the healing process begin.

The brothers, Nig (Henry Perez), Boogie (Loni Peter-Samuels) and Huata (Sam Otinga-Boyd Tanirua) also give great performances, and their Song For Grace at the end creates one of the defining moments of the show.