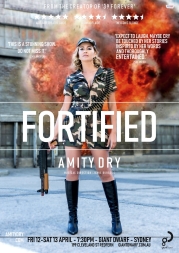 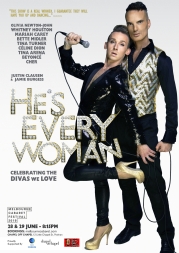 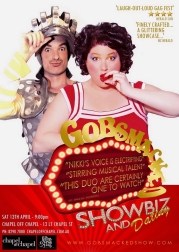 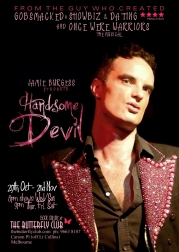 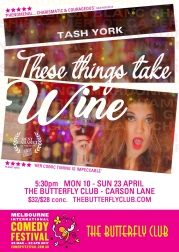 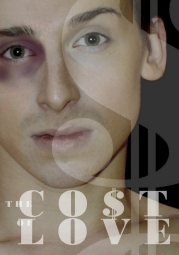 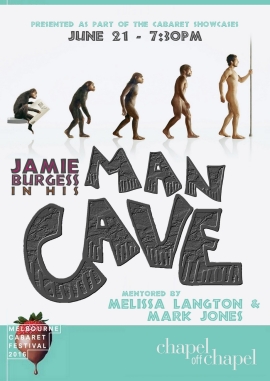 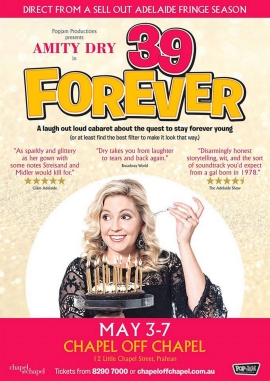 JAMIE BURGESS’ NEW SHOW TAKES ON MALE STEREOTYPES, THE SPICE GIRLS, AND LETS YOU IN ON THE SECRET OF ‘WOOING’ MEN TO BOOT!

By Stephen A. Russell. – originally appeared in MCV Magazine on October 22nd 2014

Musical theatre might not be the first medium that springs to mind for an exploration of manliness, but that’s the thrust of Jamie Burgess’ debut solo show, Handsome Devil. When I meet Burgess in a South Yarra cafe, he’s proudly sporting a bright pink checked shirt and sipping on a colourful Acai berry shake. Unpicking old-fashioned ideas of men as the ultimate providers and protectors provided him with a rich seam to mine.
“You can love musical theatre and still be a man,” he says.
Midsumma audiences may recall seeing the six-foot-four New Zealand-born star as Nikki Aitken’s sidekick in the hugely popular cabaret show Gobsmacked: Showbiz and Dating, performed at The Butterfly Club, a place Burgess has a great deal of respect for:
“They’re all about new work and giving emerging artists a break; a chance to do something exciting,” he says.
Burgess co-wrote Gobsmacked and also worked on a musical version of Once Were Warriors, adapted from Lee Tamahori’s 1994 film about the troubled family life of a Maori couple, played by Temuera Morrison and Rena Owen, which toured New Zealand in 2004.

The opening number of Handsome Devil, ‘Only a Guy,’ sets the tone. “I come out all guns blazing with the stereotype that men are really tough and big, but I’m only a guy,” he says. “I don’t have superpowers and I can’t read your mind. I’m just going to try and figure out the boy that I was, the man that I am and the one I wish to be, and how to put all that together, which sets the scene for the show.”
The boy he used to be is a successful Christian pop singer signed to New Zealand’s Parachute Music, which went really well until his pastor clicked he was a closeted gay man. Not that there’s any great drama to share: Burgess continues to identify as Christian and has a strong relationship with his church-going mum.
“I loved my life as a kid, then a teenager, in church,” he says. “The ‘woe is me, look at my terrible childhood story,’ has been done a million times and mine wasn’t like that. I think a lot of my gay friends would rather not see a show like that.”
The song ‘Name’ looks at the power behind the label our parents give us and how that helps shape our identity. It was inspired by the pregnancy of a close friend. “I asked her what she was going to call it if it was a boy, and I realised just how many boys’ names are seriously unimaginative, so you kinda grow up with this horribly boring name or, even worse in the gay community, some kind of biblical name,” Burgess says. “I didn’t love Jamie for a while. As a teenager I thought James was a little more grown up and sophisticated, but now I’ve crossed over into ‘Jamie’s great.’ Maybe that’s because of Jamie Oliver?”
Those of a similar vintage to the 35-year-old Burgess will also enjoy a segue examining the zeitgeist of the 90s. “I go rocking back in time to some of the relationships that were important to me – the Spice Girls and Steps,” he laughs. “The whole world was camp in the 90s.”
It was during this time that he first encountered other gay men while still in the closet at teacher training college – that only lasted two years before a shift to performing arts school – where Burgess’s love of musicals solidified when he took part in their staging of The Sound of Music. “They challenged my perception of what gay people were,” he says. “Up until then, I thought they were quite frightening and scary, all Rocky Horror Picture Show, then I met this amazing group of everyday, genuine people.”
Those looking for love may pick up a tip or two during the show, with Burgess doling out “gentleman’s advice” on how to woo a man, a notion that amuses him.
“I’m terrible at relationships,” he says. “I don’t have one and I suck at them. I don’t think many guys are great at relationships. The male gene is a curious one, we want to find out what’s happening over there and what that feels like.” 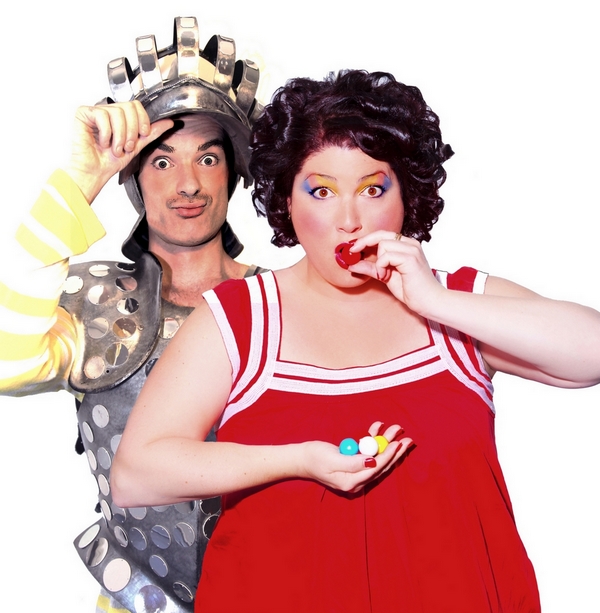 Gobsmacked: Showbiz & Dating is a wickedly funny story on the downside to the dating game, and learning to laugh at our experiences that don’t work out according to plan.
Nikki Aitken can sing. Nikki Aitken can sing really well; I’d even go as far to say her voice is electrifying. She’s also funny. Jamie Burgess has been playing the keyboard at the local church ever since he was a little boy, where he was promised ‘an organ of his very own’ to play with when he grew up. Now an adult, he really knows how to work his magic on this organ at least. Teamed together, Aitken and Burgess have created a show that has been one of my highlights for Midsumma Festival this year.
Expect hilarity, audience participation, and if you’re lucky, chocolate cake.
After sold out performances at the Adelaide Cabaret Festival and the Melbourne International Comedy Festival, Gobsmacked is here for a limited run as part of Midsumma. From the moment the show begins, expect to be captivated as you’re invited to witness the trial and tribulations of a desperately-single thirty-something woman navigate the perils of the dating world (as told from the perspective of said thirty-something year old and her gayer-than-gay housemate).
Songs are written by both, interweaving the story of Nikki’s quest for ‘the perfect man’, AKA her ‘knight in shining armour’ interspersed with musical theatre auditions and rehearsals (including a marvellous recount of how these two BFF’s first met). As to be expected, there are more misses than hits in the quest for the perfect man, but as usual, her BFF is always there when she needs a shoulder to cry on (or a keyboard to accompany her).
Gobsmacked is hilarious. Part Ab-Fab, part Julia Childs, and part Gimme-Gimme-Gimme. There’s something here to please everyone.

Gobsmacked describes the show perfectly – and if you happened to attend the Auckland Pride Festival Gala or the Big Gay Out, and tens of thousands of people did – you’ll know that Gobsmacked has ‘a show at the Maidment’, such is the sublime brazenness of these two extraordinary bravura performers and unabashed self-publicists.
For those who didn’t, Burgess and Aitken entertained at both events beginning each with a rollicking number containing that very phrase ‘Gobsmacked has a show at the Maidment’ repeated ad infinitum – and we got the message.
I nicked the following from their excellent – and helpful as there was no programme – website and feel no guilt about this as Aitken and Burgess are themselves consummate – and highly successful – magpies.
I’ve changed it a bit (but not much):
“Gobsmacked: Showbiz and Dating is an all original musical-theatre-meets-cabaret showcase, a ‘heartfelt and sincere’ celebration of the fabulous-darling single life, and a ‘love letter’ to that unique relationship that exists between the gay man and the single straight girl who are more than friends but less than lovers. Witness the duo as they tackle the funny, sometimes sad but never boring, life of a single girl trying to make it in show business whilst searching for a relationship that lasts.
“It’s also – as the website concludes – a shameless celebration of all things Musical Theatre (or as Jamie likes to call it ‘Gay Church’).”
I, for one, sing ‘hallelujah’ to that! 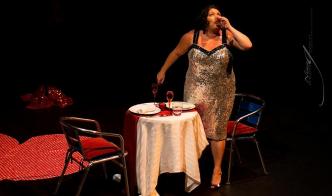 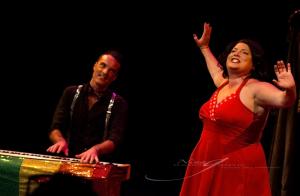 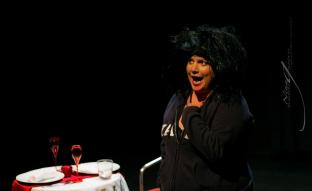 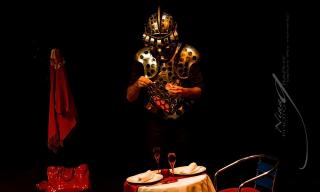 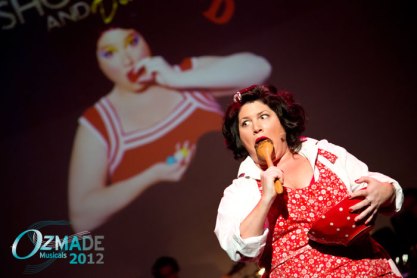 Plot-wise this pretty much sums it up but it has to be said that the narrative is largely a rack on which to hang Aitken and Burgess’s exceptional talent and even without it we’d have been bowled over by the utter élan of their performances.
Which is not to say that Gobsmacked: Showbiz and Dating is all shallow virtuosity because it’s not. Aitken, in particular, scales the heights and plumbs the emotional depths in rather spectacular fashion, and to such an extent that, in one of those unique stunned silences we all love so much, Burgess whispered ‘you didn’t think we’d go there, did you?’ – and we hadn’t.
Burgess is an astonishingly good pianist. He seems comfortable in any genre and as accompanist his work is sublime. Even given that there’s a lot in the script that is conveniently borrowed from real life – the couple actually live together – it still doesn’t fully explain the seamlessness of their collaboration. Identifying just who was leading who in the amazing array of eleven numbers was never an issue. It’s a pairing made in whatever heaven you may believe in and the audience instinctively knew this and responded accordingly throughout.
Not that Burgess waited to be asked. Seconds after the show began he identified a suitably qualified candidate in the front row, welcomed him with a delicate wee kiss and maintained a fairly constant dialogue with the audience for the remainder of the show which included a mercifully brief sing-along and some elegant arm-waving.
While Burgess holds an impish, almost improvisational connection to the audience Aitken stuns us with her versatility, her ability to move from diva to desperate housewife in the blink of an eye and her simply magnificent voice. In a word: fabulous!
The set is simple. To the left is Burgess’s powerhouse keyboard fronted by a rainbow flag, to the right a table for two all set for dining, at centre back a coat stand, and central on the floor a fabric heart in red. Just about everything is red, in fact, a colour that Aitken wears as though the ruby palette was designed especially for her.
The whole is, of course, a musical theatre burlesque, and it’s based on Tipsy whichBurgess describes as “a loving parody of the musical fable Gypsy”and which we all know (but I didn’t: just what sort of queer am I, after all?) was created by Jule Styne, Steven Sondheim and Arthur Laurents, to give them their due. I mention this because there’s more than a hint of Sondheim at his darkest in some of Burgess’s songs – both lyrically and musically – and I sincerely hope he’ll take this as a compliment because it’s certainly meant to be one. ‘Being Alive’ from Company and ‘Losing My Mind’ from Follies immediately come to mind.
There are some cracker lines – especially for the theatrical types – “of course I’m making a scene, that’s what I do”, “masticating by yourself isn’t that much fun”, “my lasagne is the food of love” – and both Aitken and Burgess have exquisite comic timing but, when all is done and said, there’s only the music, both vocal and played, driving, sidling, oozing, stomping, soaring and it’s this, and its sublime production, that leaves the most powerful mark.
It’s everything an audience could ask for – and there’s cake for everyone at the end. Chocolate cake, of course.
The show has an R18 rating – or R16 depending on where you read it – but ignore that. Our ten year old joined us as he usually does and he loved every minute. He saw bits at the Pride Gala and bits at the Big Gay Out and still he wants to see it again. It’s risqué, sure, and it’s a bit rude but it’s never vulgar or, as my old Mum would say, ‘unnecessary’. As performers Burgess and Aitken are too clever for that. They could turn a sow’s ear into a silk purse if they had to but they don’t because this show is class all the way.
So, if you’re a bit blue – and even if you’re not – and you’re looking for a musical theatre pick-me-up, make your next concoction a Burgess and Aitken Gin and Iconic because Gobsmacked: Showbiz and Dating will give you just the lift you need.
Widgets
Loading Comments...